We congratulate the Meyer & Meyer subsidiary, WKS Textilveredlungs-GmbH in Wilsum, on winning the "IHK TOP-Ausbildungsbetrieb" award. 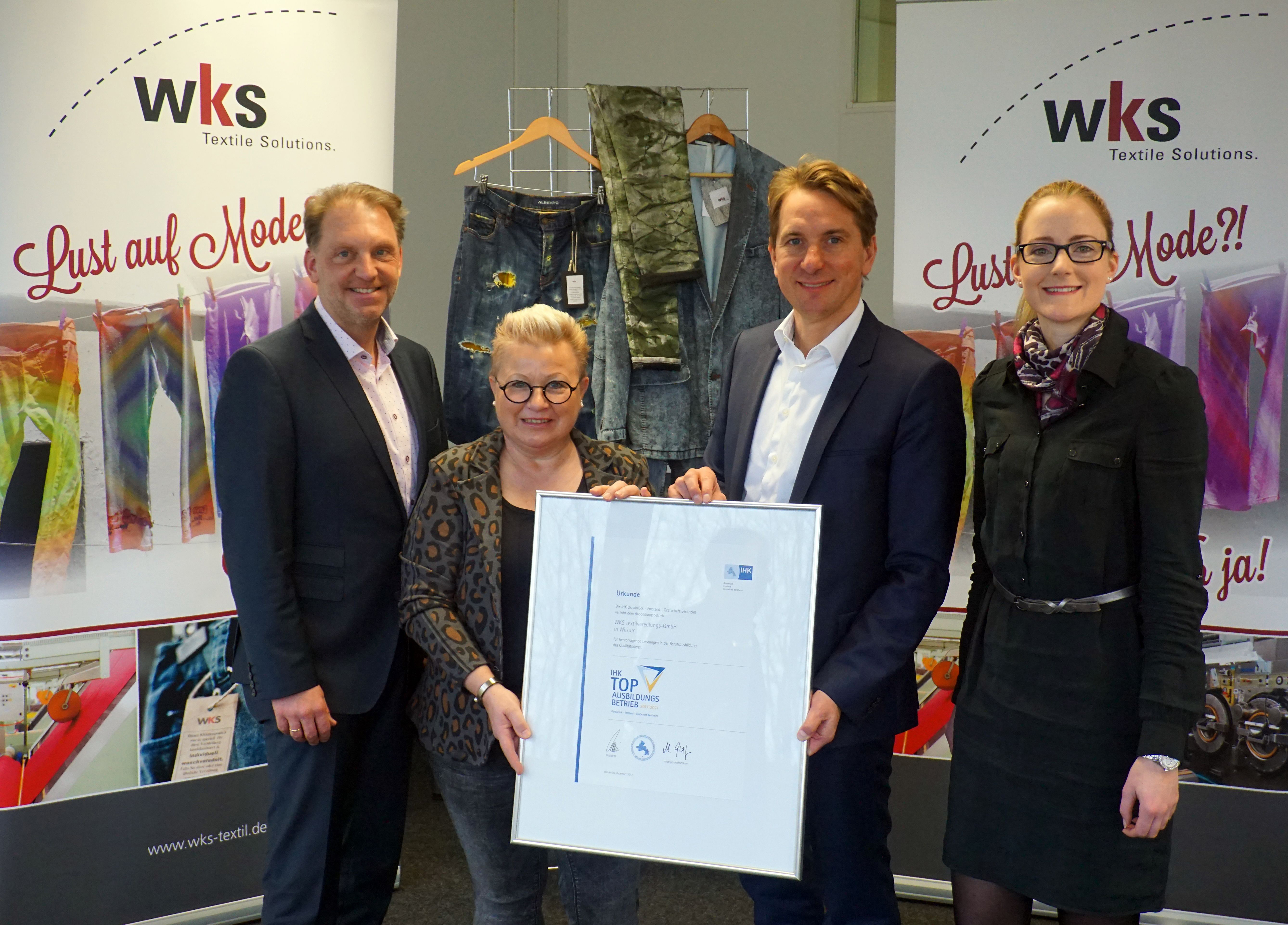 In recent months, the Meyer & Meyer subsidiary WKS Textilveredlungs-GmbH in Wilsum has focused intensively on the documentation, analysis and further development of its own aprenticeship practice. The efforts have paid off, because the WKS has been able to prove its excellent training quality. Executive Board member Jörg Brune, together with HR manager Helga Wolterink and WKS apprenticeship manager Lena Snippe, has now received the coveted "IHK TOP-Ausbildungsbetrieb" award from IHK Managing Director Marco Graf.

"The competition for qualified applicants and the demands placed on apprenticeship practice are becoming tougher in view of declining student numbers. With the award as "IHK TOP-Ausbildungsbetrieb" we would therefore like to highlight the companies that are outstanding in in-firm apprenticeship", explained Graf at the award ceremony and added: "WKS Textilveredlungs-GmbH has impressively demonstrated the high quality of its apprenticeship. School leavers and their parents can be sure that the apprentices can expect a first-class start to their careers here".

"The training of young people enjoys a high priority in our company. Therefore, the award is also a great recognition for our committed trainers and motivates us to improve our apprenticeship further in order to inspire young people for our company", Jörg Brune was pleased to say.

Certification as a "IHK TOP-Ausbildungsbetrieb" is aimed at companies offering apprenticeships in the IHK region that make outstanding efforts to train young people. The system allows an in-depth analysis and evaluation of apprenticeshop practice in the companies and is structured in two stages. On the basis of an extensive questionnaire, the IHK training consultants first conduct an analysis. This is followed by an audit in the company with independent, professionally experienced examiners, in which all sub-processes of the training are critically examined. "The certificate is on the one hand an outstanding instrument in HR marketing. On the other hand, even companies with already high apprenticeship quality receive new impulses and ideas for the further development of their own apprenticeship," explained Graf.

You can find logos, press images and publications in our press portal

What can we do for you?
Request a quote

We use cookies to personalise the content on our website, to analyse access to and use of our website, and to provide social media functionality. We also share information about your usage behaviour on our website with our analytics, advertising or social media partners. In some cases, they may combine this information with other data provided by you or collected by our partners in relation to your use of the aforementioned services. Privacy Policy | Legal note